Advocate.com writes about my charity swim: Seven Miles, One Cause 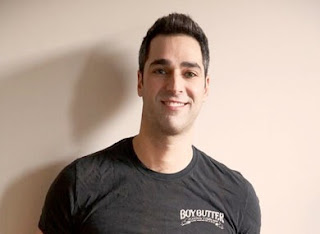 Click here to read original Advocate.com post by Michelle Garcia
Every summer for the past four years, Eyal Feldman has shown his passion for elder care by stripping down ... and swimming several miles in the name of charity.

In 2006, Feldman wanted to do more charity work, so he started volunteering with the Los Angeles Jewish Home, which focuses on wellness for Jewish elders. He started doing at-home visits with seniors and became close friends with some of them. But while plans to move to New York pulled him away, but he didn't want to stop volunteering, so he sought a new place to lend a hand. That's where he first learned about Services and Advocacy for GLBT Elders, or SAGE, in summer 2008.

"They said I had to wait until September for volunteer training," he says. "So that's when the idea for my swim came, because I wanted to show how serious I was."

As Feldman, 33, waited to become a "friendly visitor" for SAGE, he started training for a charity swim to support the organization. The act suits him, as he says he would "rather be more hands-on than just write a check," so he suited up and took on the St. Lawrence River, raising $2,000.

And once he started his work as a SAGE volunteer, he recruited his peers to join him in reaching out to elderly LGBT people. Through his volunteer work, he met Larry Murphy, an elderly man who Feldman says became one of his closest friends through biweekly visits over the course of two years. Murphy passed away in March.

"He was out of the closet since the '40s — the term 'closet' didn't even exist!" Feldman says. "We had just a great friendship. He always said my visits were like bringing a breath of fresh air from the outside. It's hard when you get to be that age and you don't have a lot of friends who are still around."

This year, Feldman, the CEO of Boy Butter, is heading to Lake Mead in Nevada for an event he calls "Hoover Dam, This is a Long Swim" this Sunday, with a goal of raising $6,000 for a seven-mile swim. That follows his previous "Jesus Walked, I Swam" on the Sea of Galilee in Israel and other fund-raising swims in the St. Lawrence River and a bay off Long Island. This time, he's keeping it close to his family in Los Angeles, who will act as his safety crew, following him in a boat during his journey.

Though Feldman is close with his family, he knows that some LGBT people don't share the same familial bonds, especially as they age.

"I've always been attracted to, for some reason, helping the elderly," he says. "I know I'll reach that stage in my life, and I would like to think someone would do the same for me."
Learn more about Eyal's fund-raiser at HooverDamThisIsALongSwim.blogspot.com

I've just installed iStripper, and now I enjoy having the best virtual strippers on my desktop.