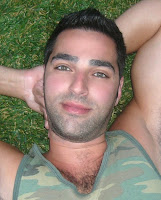 Well I turned 31 this week and may I just say that already it has been quite a week. November 17th was the day I celebrated the day that marked my 31st ride around our sun.
I feel good about myself in general, I am in the best shape, and I am now old enough to play a sophmore in the original Beverly Hills 90210.
Like a fine wine or a kind of cheese that is aged, I'm only getting better!
Posted by Eyal Feldman at 8:22 PM 1 comment:

Last night's was amazing. Ever since the election and the California ban on Same-Sex marriage was declared, I was so jealous I could not participate in the demonstrations in CA. 10,000 of New Yorks Gays and those who support them congregated in front of the Mormon Church (who bankrolled most of the organizational support for the gay marriage ban), then we marched down to Columbus Circle and protested in a a non-violent and civilized manner. It was powerful, amazing, and never before had I ever done anything like that. I never felt passionate about a cause enough to actually take to the streets and have my voice be heard. I am including a video of my awesome activist Jewish prince, Eric Leven from www.knucklecrack.blogspot.com.
Posted by Eyal Feldman at 12:34 PM No comments:

YOU CAN NOT LEGISLATE GAY AWAY!!!

The Gay marriage ban is a travesty. I can't believe Californians can say that I am a second class citizen. It is voting discrimination into the constitution, again. Down with inequality and bigotry. If you are against Gay Marriage, than don't marry a gay person. I am confident that the courts will overturn this. When people say that the people voted for a ban on marriage, than I say, people in the past in this country have voted against equality for blacks, women and gays. And just because a majority believe that something is wrong, does not make it so. WE WILL PREVAIL!! WE WILL MARRY AND WE PROMISE TO FIGHT!!! GAY PEOPLE SHOULD NOT HAVE TO PAY TAXES IF THEY ARE NOT FULL CITIZENS!! We will win, it is just a matter of time, that is where things are headed.
Posted by Eyal Feldman at 10:12 AM No comments:

Obama swept the elections and won by a landslide by over 6,000,000 votes. This was a sweet sweet victory. But I must speak about my former home state of California which took a step backward last night by passing Proposition 8.

ELIMINATES RIGHT OF SAME-SEX COUPLES TO MARRY BY WRITING IT INTO THE STATE CONSTITUTION.

This amendment passed and Gays and Lesbians are less free today in California.
Posted by Eyal Feldman at 9:44 AM No comments: