Posted by Eyal Feldman at 1:44 PM No comments: 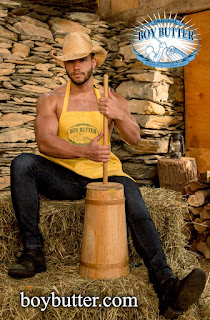 After last year's article regarding the Boy Butter TV ad ban by Comcast in the Chicago market spread around the world, the subsequent wave of international media attention and criticism forced the giant cable company to change it's stance. We pointed out the hypocrisy of banning a gay themed ad and stood up for ourselves and gay visibility. Leveling the playing field for future gay advertisers to speak to a larger mainsteam audience, especially in the midwest. So this year Boy Butter is churning things up with a hot new commercial during the entire 14 week run of season 10 of Rupaul's Drag Race premiering on Thursday March 22nd at 8/7 pm central on VH1 in LA, NYC, Chicago and nationwide in Canada on OutTV.

Last summer we conducted a contest search for the new face of Boy Butter and after six months the run away victor was NYC's hot gay gogo guru, Samuel Lemar. This adonis is half-black, half-white and 100% hot and gyrated his way into all of our hearts and though most circuit parties as well, literally blowing away the competition. He quickly won a contract with Boy Butter and shooting for the new commercial commenced, produced by visionary videographer Daniel Robinson.

Even though most of the audience that watches Rupaul's Drag Race is straight, it is in fact the most popular and influential gay TV show ever created. This show has helped spread gay culture and Boy Butter to more homes than we could ever imagine and as part of Rupaul's mission we want to help fight the friction in our lives while disseminating a little gay culture as well, even during the station breaks. This year Comcast approved our ad within a few hours, so we like to think that we are helping make TV gay again!

Posted by Eyal Feldman at 10:31 PM No comments: