Best NYT article yet: Israel’s Settlers Are Here to Stay

Maale Shomron, Israel
WHATEVER word you use to describe Israel’s 1967 acquisition of Judea and Samaria — commonly referred to as the West Bank in these pages — will not change the historical facts. Arabs called for Israel’s annihilation in 1967, and Israel legitimately seized the disputed territories of Judea and Samaria in self-defense. Israel’s moral claim to these territories, and the right of Israelis to call them home today, is therefore unassailable. Giving up this land in the name of a hallowed two-state solution would mean rewarding those who’ve historically sought to destroy Israel, a manifestly immoral outcome.

Of course, just because a policy is morally justified doesn’t mean it’s wise. However, our four-decade-long settlement endeavor is both. The insertion of an independent Palestinian state between Israel and Jordan would be a recipe for disaster.
The influx of hundreds of thousands of Palestinian refugees from Syria, Lebanon, Jordan and elsewhere would convert the new state into a hotbed of extremism. And any peace agreement would collapse the moment Hamas inevitably took power by ballot or by gun. Israel would then be forced to recapture the area, only to find a much larger Arab population living there.
Moreover, the Palestinians have repeatedly refused to implement a negotiated two-state solution. The American government and its European allies should abandon this failed formula once and for all and accept that the Jewish residents of Judea and Samaria are not going anywhere.
On the contrary, we aim to expand the existing Jewish settlements in Judea and Samaria, and create new ones. This is not — as it is often portrayed — a theological adventure but is rather a combination of inalienable rights and realpolitik.
Even now, and despite the severe constraints imposed by international pressure, more than 350,000 Israelis live in Judea and Samaria. With an annual growth rate of 5 percent, we can expect to reach 400,000 by 2014 — and that excludes the almost 200,000 Israelisliving in Jerusalem’s newer neighborhoods. Taking Jerusalem into account, about 1 in every 10 Israeli Jews resides beyond the 1967 border. Approximately 160,000 Jews live in communities outside the settlement blocs that proponents of the two-state solution believe could be easily incorporated into Israel. But uprooting them would be exponentially more difficult than the evacuation of the Gaza Strip’s 8,000 settlers in 2005.
The attempts by members of the Israeli left to induce Israelis to abandon their homes in Judea and Samaria by offering them monetary compensation are pathetic. This checkbook policy has failed in the past, as it will in the future. In the areas targeted for evacuation most of us are ideologically motivated and do not live here for economic reasons. Property prices in the area are steep and settlers who want to relocate could sell their property on the free market. But they do not.
Our presence in all of Judea and Samaria — not just in the so-called settlement blocs — is an irreversible fact. Trying to stop settlement expansion is futile, and neglecting this fact in diplomatic talks will not change the reality on the ground; it only makes the negotiations more likely to fail.
Given the irreversibility of the huge Israeli civilian presence in Judea and Samaria and continuing Palestinian rejectionism, Western governments must reassess their approach to resolving the Israeli-Palestinian conflict. They should acknowledge that no final-status solution is imminent. And consequently, instead of lamenting that the status quo is not sustainable, the international community should work together with the parties to improve it where possible and make it more viable.
Today, security — the ultimate precondition for everything — prevails. Neither Jews nor Palestinians are threatened by en masse eviction; the economies are thriving; a new Palestinian city, Rawabi, is being built north of Ramallah; Jewish communities are growing; checkpoints are being removed; and tourists of all nationalities are again visiting Bethlehem and Shiloh.
While the status quo is not anyone’s ideal, it is immeasurably better than any other feasible alternative. And there is room for improvement. Checkpoints are a necessity only if terror exists; otherwise, there should be full freedom of movement. And the fact that the great-grandchildren of the original Palestinian refugees still live in squalid camps after 64 years is a disgrace that should be corrected by improving their living conditions.
Yossi Beilin, a left-wing former Israeli minister, wrote a telling article a few months ago. A veteran American diplomat touring the area had told Mr. Beilin he’d left frightened because he found everyone — Israel, the Palestinian Authority, Jordan and Saudi Arabia — content with the current situation. Mr. Beilin finds this widespread satisfaction disturbing, too.
I think it is wonderful news. If the international community relinquished its vain attempts to attain the unattainable two-state solution, and replaced them with intense efforts to improve and maintain the current reality on the ground, it would be even better. The settlements of Judea and Samaria are not the problem — they are part of the solution.
Dani Dayan is the chairman of the Yesha Council of Jewish Communities in Judea and Samaria.
Read original NYT article here
Posted by Eyal Feldman at 8:41 AM No comments:

Nathaniel and I hanging out at the top of the Meetup.com HQ roof roof-deck. We are having the best visit and rediscovering the magic and beauty that is NYC. 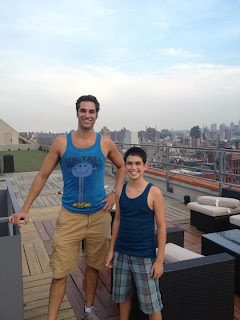 "I would give the greatest sunset in the world for one sight of New York's skyline."
- Ayn Rand, The Fountainhead

Posted by Eyal Feldman at 8:29 PM No comments:

As my personal mission to improve the art Uncling, or of being the best Uncle ever. Brendan and I decided to give a cool gift for the upcoming bar mitzvah boy & handsome nephew, Nathaniel Alpin. Brendan and I flew him out for an 8 day super adventure of a lifetime in the Big Apple. Only two days in and we are having an amazing time and covering a lot of ground. Making memories and walking through all the beautiful and historic collection of villages that is Manhattan. We had already seen the Statue of Liberty, Wall Street, City Hall, Chinatown, Little Italy, Soho, West Village, Washington Square Park and The Highline Park. For a well rounded feel we thought to take advantage of the world class arts by taking in a great Broadway show at Lincoln Center, War Horse. We are lucky enough to know one of the stars of the show, Hunter Canning who allowed us to come backstage and experience a real show from behind the scenes, play around with the props, meet the main actors of the show and have our Playbills signed. Our upcoming adventure's next stop is the Metropolitan Museum of Art and The Guggenheim, The Jewish Museum, Natural History Museum explore the Upper West Side and Upper East Side and who knows, just spending some quality time together is always fun. 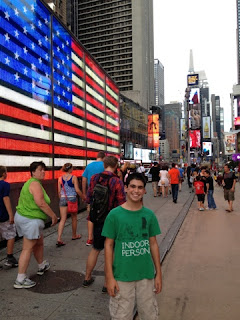 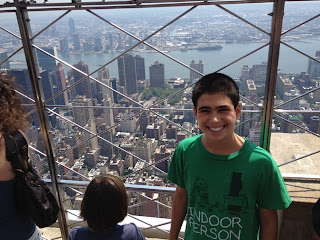 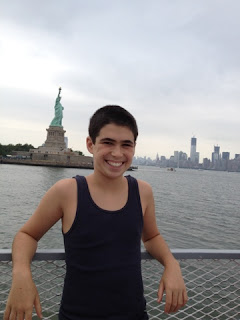 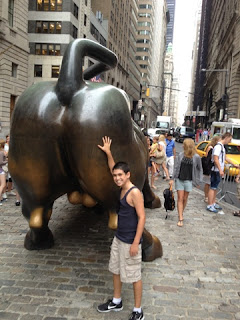 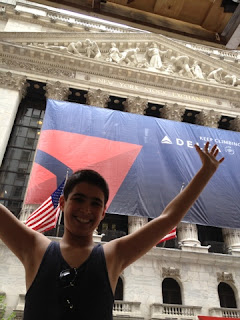 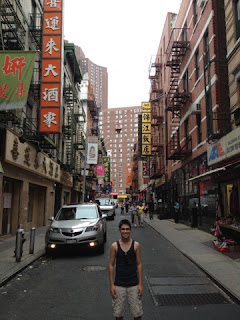 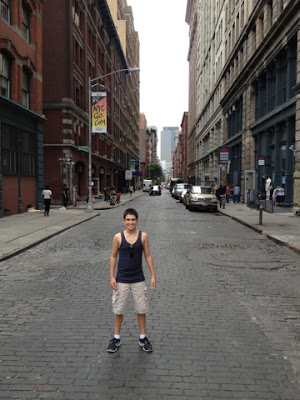 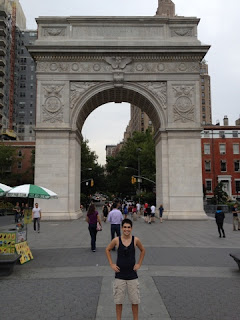 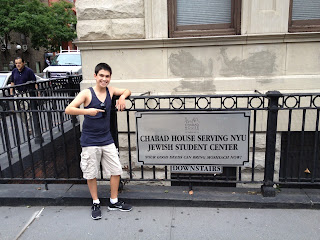 Shout out to the Jew crew of NYU 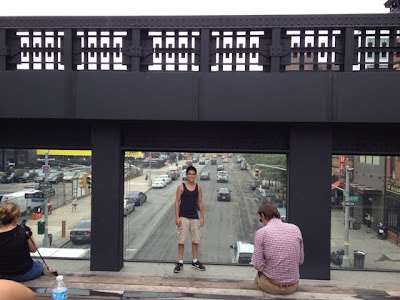 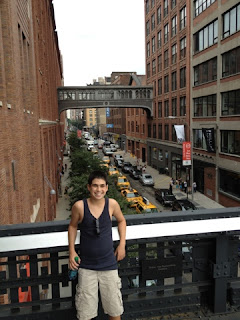 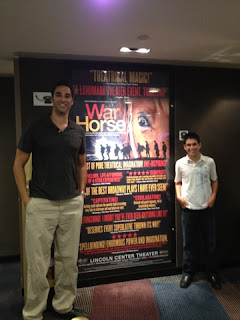 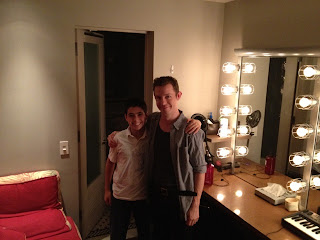 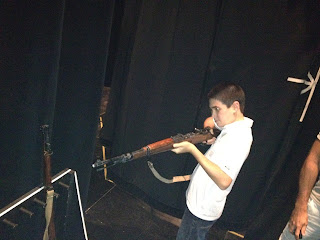 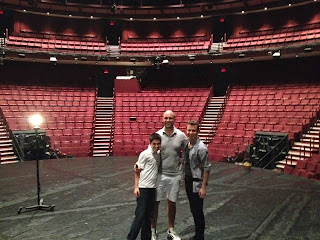 Nathaniel, Brendan and Hunter on stage next to the ghost light after the show.
Posted by Eyal Feldman at 10:15 AM No comments:

Shot in the beautiful Spanish island of Ibiza, Donna Feldman, my supermodel sister is showing what looking good is all about. This collection of images was produced for the German fashion giant, Faber, and boy does this girl knows how to serve up the style. Faber is to fashion what Donna is to gorgeousness.

Beauty is an outward gift, which is seldom despised, except by those to whom it has been refused. - Ralph Waldo Emerson 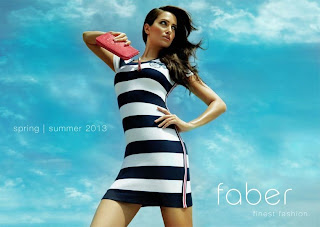 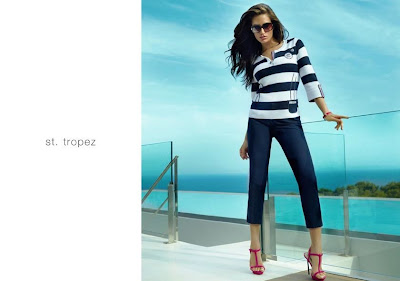 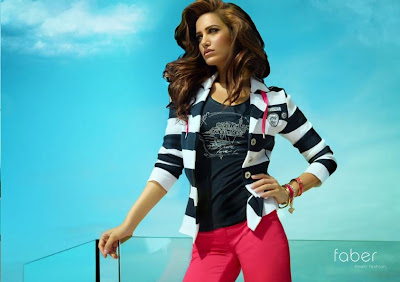 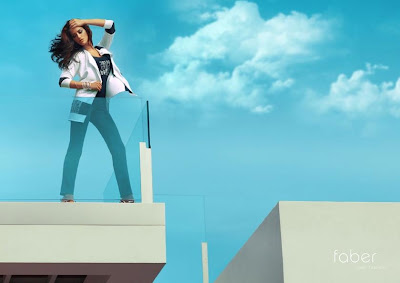 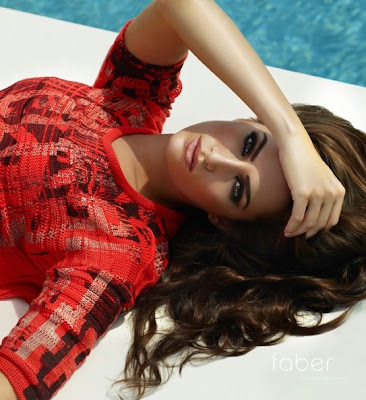 Posted by Eyal Feldman at 1:07 PM No comments:

The heat of the summer in Fire Island.

This past weekend in Fire Island was great. The weather was hot, ocean refreshing and the nightlife was busy. In addition the incredibly beautiful Israeli businessman, Eliad Cohen, one of the owners of Gay-ville.com was in Fire Island to promote his new company. Gay-ville.com is a Tel Aviv based gay-owned and operated community marketplace for people to list, discover, and book gay friendly accommodations around the world whether it be an apartment, a room or even a sofa. I think this is a great idea, it is like a gay-version of Airbnb and any chance to meet and look at Eliad Cohen is always a treat. 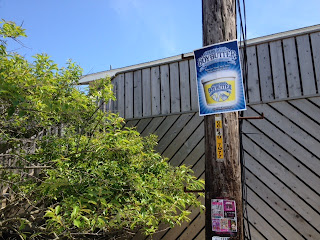 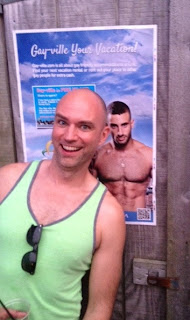 Brendan heard his 2nd favorite Israeli, Eliad Cohen was in FIP.
By the look this smile he seems excited. 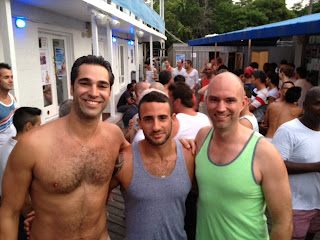 Me, Eliad Cohen and Brendan McGovern 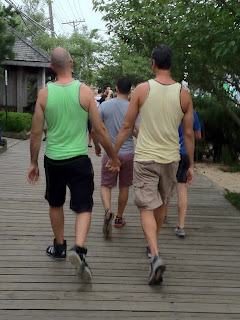 Posted by Eyal Feldman at 10:38 AM No comments:

4th of July in NYC

Nothing compares to the fireworks of the big apple. Here are fireworks from 30th Street on the far west side in the north Highline area. 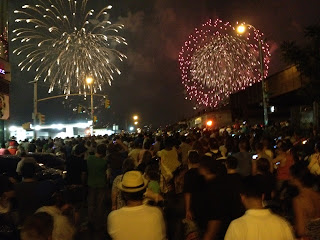 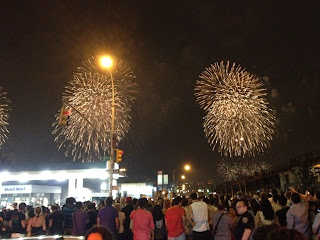 Posted by Eyal Feldman at 11:38 AM No comments: