The Kamanawana Marathon Swim, my 8 mile lone charity swim from Maui to Lanai for SAGE


I would like to announce my 5th annual lone non-stop marathon swim for charity. This year I'll be swimming from the Hawaiian Island of Maui to Lanai for a total of 8 miles (13 km) on Nov. 1st, 2012 and it's called The Kamanawana Marathon Swim. This is my first open ocean marathon swim and I will have a safety crew in a boat next to me for my most challenging swim yet, which is why my goal to raise $10,000 is also my loftiest. Please sponsor my swim with a donation of at least $30 or more for SAGE, (Services and Advocacy for Gay, Lesbian, Bisexual and Transgender Elders) was established in 1978 and is the world’s oldest and largest non-profit agency dedicated to serving and advocating for LGBT older adults. All donations are tax deductible and certain generous donors will be matching donations dollar for dollar.

Click on this link to learn and donate: http://sageusa.org/specialevents/home.cfm?ID=109

Eyal Feldman, swimmer and activist for the elderly
Posted by Eyal Feldman at 10:05 AM No comments:

NY Times: From Blossom to Amy but Still Always Mayim 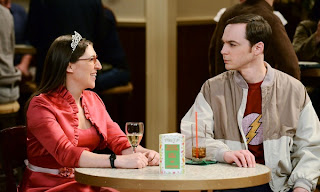 IT is 9:30 on a weekday morning, and the scene inside the one-bedroom house in Los Angeles’s Studio City neighborhood feels like an advertisement for the neo-hippie home-schooling life.


The two boys are still in pajamas. The family bed, adjoining mattresses where the two sleep with their parents, has been hastily made. The mother, who has finished cooking a dish of vegan macaroni and cheese, summons her 6-year-old for a piano lesson, padding across the room in sock-monkey slippers.
Then the scene changes. The father heads to the beach with the boys. The mother, who has traded the slippers for four-and-a-half-inch gold heels, stands in the living room in a floor-length Bordeaux gown, as a well-tanned stylist looks on approvingly.
Stylist: “Perfect. Now I just need to get you a nail color.”
Mother: “No, I need to get the vegan nail polish.”
(Mother gives brief tutorial on a dye, found in some cosmetics, made from crushed bugs. Stylist freezes, aghast.)
The mother in question: Mayim Bialik, 36, star of the 1990s TV show “Blossom,” who will wear the Bordeaux gown on Sunday at the Emmy ceremony, as a nominee for best supporting actress for her role as the hilariously deadpan neurobiologist Amy Farrah Fowler in the comedy series“The Big Bang Theory.”
If Ms. Bialik has the distinction of being a celebrated child star who slipped off the radar, led a successful civilian life, then re-emerged years later in not only what appears to be prime mental health but a well-received role in a leading sitcom, it’s not her only distinction. Even in a world where it’s become common for celebrities to be not just performers but politicians, business owners, international humanitarian workers and conspicuously attentive parents, Mayim Bialik’s collection of choices is unusual.
Ms. Bialik is a proponent of attachment parenting, the intensive, much-debated child-rearing approach that involves co-sleeping (hence the family bed), natural childbirth and nursing-on-demand. She’s also the author of a recently published book on the topic, “Beyond the Sling: A Real-Life Guide to Raising Confident, Loving Children the Attachment Parenting Way,” and just announced that she is writing a vegan cookbook. In addition to playing a scientist on TV, Ms. Bialik also has a Ph.D. in neuroscience from U.C.L.A.
“We’ll ask her questions like, ‘If you’re going to dissect brains, how do they come packaged?’ ” said Bill Prady, a creator and executive producer of “The Big Bang Theory.” (Answer: in containers resembling large plastic trash cans.)
Ms. Bialik is also an observant Jew (she calls herself “aspiring modern Orthodox”). On Facebook and her blog on the Jewish parenting Web site Kveller, Ms. Bialik has been unusually open about her life, her choices and her imperfect attempts to reconcile the conflicts that crop up around them.
To read the rest of the NY Times article click here
Posted by Eyal Feldman at 10:27 AM No comments: 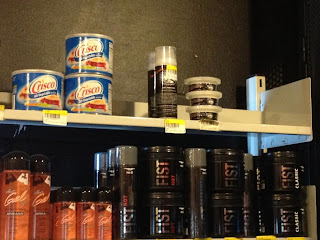 Michael Lucas: Your Boy Butter in the adult shop in Paris.

Posted by Eyal Feldman at 7:25 PM No comments:

Truer words were never spoken by American politician about this issue.
Now lets speak more openly about it in public.

Posted by Eyal Feldman at 10:16 AM No comments:

Kim Kardashian describes herself as ‘Liberal Republican’ and a swing voter


In a recent interview this week in The Guardian, Kim Kardashian (a fellow Hidden Hills, CA resident, like yours truly) touches on her political attitude in this election season. The first time she voted in her life was for Obama. "I loved being part of that decision-making process, but I never voted in prior years when I was legally eligible. I don't know why." She is, she says, a "liberal Republican", put off Mitt Romney because of his stance against gay marriage. This election, she says, "I don't know which way I'm going to go." Her favourite politician of all time is Kennedy.
Posted by Eyal Feldman at 10:53 AM No comments: 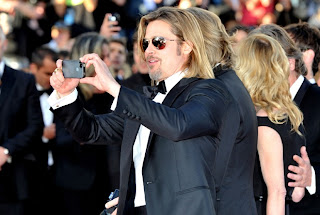 Out of Tinseltown (assuming people still call it that) comes the news that Brad Pitt will be taking his wonkish talents from the intricacies of Moneyball, his film about baseball sabermetrics to the intricacies of Nazi efficiency in a film about IBM’s role in the Holocaust. The flick-to-be is based on the 2001 book “IBM and the Holocaust.” New York Magazine provides a little bit of background on the project and on the history of how the collaboration between IBM and the Nazis came to be:

The short answer is that IBM’s then-chief executive, Thomas Watson, formed a strategic alliance with Nazi Germany starting in 1933. Punch cards were used to help sort through mountains of German census information, cross-referencing data about the mother tongue, religion, nationality, profession, and location of 66 million Germans to quickly and ruthlessly identify, tax, ghettoize, deport, and ultimately exterminate through labor Europe's Jews.
Pitt’s IBM and the Holocaust project had been set up at HBO but was never announced, and as late as last January was still gathering steam as a feature film with a script by Marcus Hinchey (who penned the 2010 Ryan Gosling true crime thriller, All Good Things). But insiders now tell us that the project has left the pay-cable outfit, and Pitt’s Plan B production company is shopping the project around to find it a new home on cable TV or, increasingly likely, as a theatrically released feature. Sources familiar with the project say that Pitt has attached himself to star in the project in order to attract directors, even though a Plan B insider insisted that Pitt was not formally attached to star, and might not ultimately.

Posted by Eyal Feldman at 7:14 PM No comments:

Brendan and I were in Cape Cod this weekend for a family reunion. On Saturday morning most of the family went to a nearby lake beach in Centerville, Massachusetts called Lake Wequauet. And as you all know, if I see a lake a powerful urge overwhelms me and makes me want to swim, swim, swim. So I jumped in immediately for a good 60 min 2 mile swim. There is nothing like vigorous exercise to get the juices flowing.
Posted by Eyal Feldman at 11:06 AM No comments:

Posted by Eyal Feldman at 1:19 PM No comments:


With the entire world watching on live TV, the Democratic National Committed railroads its own delegates over G-d & Jerusalem. DNC asked for a late amendment to the platform. Ted Strickland read the amendment, lots of cheers.. then Antonio Villaraigosa asked for a vote, needing 2/3rds to affirm. And he asked for Yeas.. and it was pretty loud. Then he asked for Nays and it was MUCH louder. He frooze. Then we went.. umm.. maybe I need to read the amendment again. Asked people to vote again.. and at least 50% of the voters responded NAY. He turn turned to someone who ran onto the stage, said something about "we can't do that".. then asked them to vote again. Again, more then 50% (by volume) voted NAY.. and then he just turned and said, with 2/3'rds of the members voting AYE, the amendment passed. And the place boomed in boos.
Posted by Eyal Feldman at 6:42 PM No comments:

As our last weekend on Fire Island comes to a close this labor day we decided to have a bash to celebrate the end of a great summer at the Pines. Perfect weather, booze, good friends, great music and an ocean breeze made the Boy Butter beach house bonanza another super fun party for the record books. Happy Labor Day! 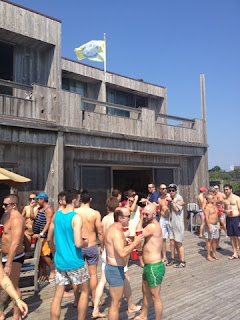 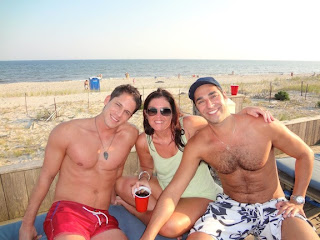 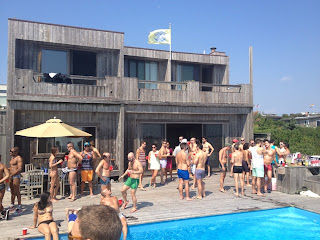 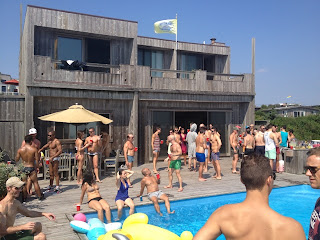 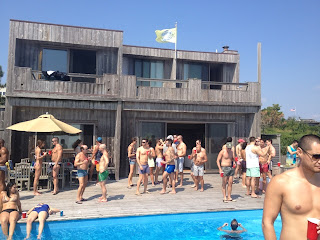