Last night we enjoyed our yearly tradition of attending the Hedda Lettuce Holiday Show at Chelsea's Metropolitan Room. Hedda and Boy Butter are like peanut butter and jelly, just meant to be. Boy Butter Lubricants is a proud sponsor of Hedda Lettuce and she works it into her comedy and song routine perfectly. Any chance you have to go see Hedda Lettuce, please click on the link to learn more about the hilarious Queen of Green 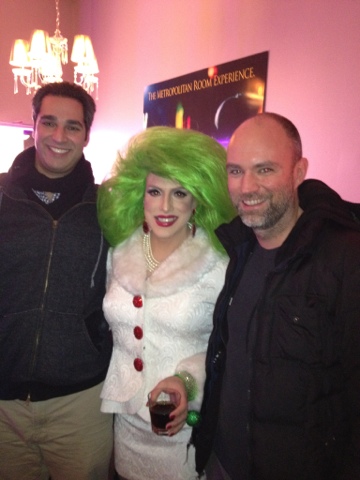 Me, Hedda and Brendan
Posted by Eyal Feldman at 10:33 AM No comments:

HEbrew: the app for gay Jews

Posted by Eyal Feldman at 10:59 AM No comments:

Last night I had the pleasure of joining in one of the most amazing and unique Jewish communal experiences there is in Manhattan today. Friday Night Lights, a series of sophisticated Shabbat dinners for the modern Gay Jewish man, which is created and hosted by my good friend, Robert Saferstein. Robert manages to bring together an eclectic and elegant group of Gay Jewish men from around New York and it's surrounding communities. The mix of great people and delectable multi course kosher fayre makes me want to go back again and again. I did not know what to expect at first, except for meeting new people and seeing people I already know dressed to the nines. If you can make it to the next Friday Night Lights, please go, bring a friend, it is so awesome, can't wait for the next one. 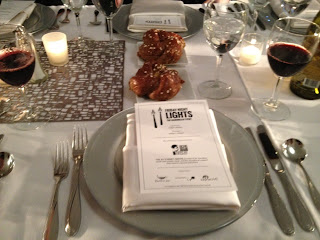 Menu for the Shabbat meal 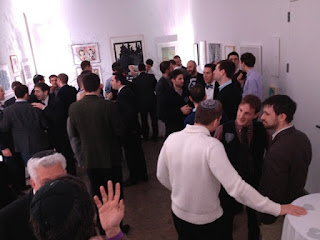 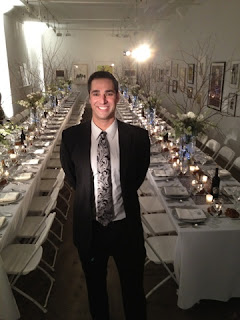 My photo right before we sat to eat 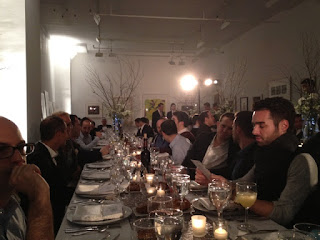 Sitting down for the communal meal 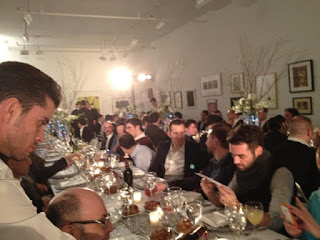 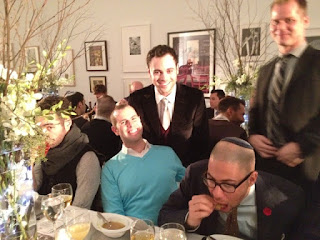 Our amazing host Robert Saferstein and Jayson Littman (sitting in blue shirt)
and Adam Fox, who will not love the photo of him eating :  )

Posted by Eyal Feldman at 12:23 PM No comments: 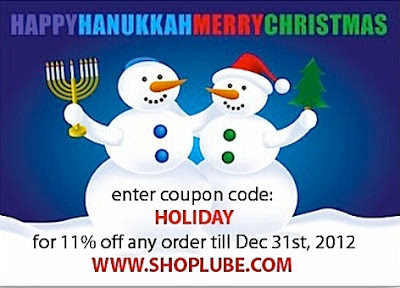 Happys Holidays from www.shoplube.com,
the official Boy Butter Lubricants store with tons of adult novelty products.
Just enter coupon code: HOLIDAY
11% off any order and always includes free samples (Expires Dec 31st, 2012)
Plus free shipping on US orders of $50 or more only on www.shoplube.com

Posted by Eyal Feldman at 1:28 PM No comments:

In 1996 I was fourteen years old and realizing I might be gay. I hated it. I wanted nothing to do with it. Because of shows like 90210, The Real World, and school-based safer sex discussions due to Magic Johnson’s post-HIV fallout, I had a very clear understanding of what being gay meant and I couldn’t stand the fact that it was happening to me. Sure it was fine if others were gay. But not me. I raged with a bitterness that this was singling me out and I felt doomed. I tried whatever I could to block my curiosity about men that was relentlessly creeping its way into my thoughts, into my dreams. Being gay was the first thought I would wake up with and the last thing I’d think about before I went to sleep. It was inescapable and plagued me terribly. The stress of this caused me to break out in canker sores that were cratered all over my mouth from cheek to tongue. All I remember feeling was that I just wanted to sleep. I wanted to sleep and be someone else and just be away from it all.
1996 was also the year my family would get our first dial-up modem and AOL 3.0. The internet was slow and chunky and would take what seemed like forever to download a single jpeg file. But there I would be, every day after school, the pit of guilt so heavy in my stomach as I clicked my way through searches I told myself I didn’t want to search for and images of men I wished I didn’t want to look at. During the loading process I would try to will myself to shut off the computer, to occupy my time in a different way, but I couldn’t. There was a force too strong, an interest too deep. The truth is, as much as I hated it, I wanted to discover more.
Most of the images did nothing for me except remind me of how much I didn’t want to be part of this lifestyle. I remember many images of what seemed like young men. Often they were blond, smooth, blue-eyed, thin….boyish. I felt nothing, no solace, no reward, just…gay. But it wasn’t until an image popped up—an image like nothing I had seen before, an image of two full-grown, thickly built, hairy-chested, bearded men kissing each other—that the key turned, the lock popped, and the floodgates opened.
These were two men, who looked like men, kissing each other. The image made my heart skip. It made me hungry. It made me feel that there might be options or a different angle or something I never considered about being gay. It gave me a sense of relief. It made me feel good. It was the first time in a long time I felt alright.
I can still remember that image. It’s ingrained in my head and I’ve seen it time and time again since I first saw it fifteen years ago. It was the first image that would actually give me hope about being gay, and it was an image of what we widely know of today as bears.

I didn’t come out of the closet until I was 18, and ever since then bears have been at the epicenter of my gay life and one of the most beloved aspects of my entire being. Everyone has their own personal definition of what bear means to them or what bear is but for me, bear was the first time I felt okay about being who I am. I’ve always liked older men, hairy chests, a more blue collar-looking form of masculinity, and it wasn’t until I saw that image that it all dawned on me. I realized I always had crushes on my male teachers or my soccer coach, and it finally made sense as to why I’d find excuses to linger in my father’s tennis club locker room. There were real men in there. Unmanicured, and unapologetically male. I liked men and I had always been into men. Not boys or models or smooth-faced actors. I liked a little thickness, a burly factor or two, and fuck me if I didn’t love a hairy chest.
I’m thirteen years out of the closet now and the term bear is one of many personal definitions. Sure, bears can be fat or stocky or burly or built or thin or covered in hair or kind of hairy or slightly hairy or bearded or goateed or neitherl, and sure, it helps if you’re some of those things, but I suppose it only matters to the person you’re chasing or the person chasing you.
To me, bear is just a mind-set these days. It’s a way of classifying yourself to a certain niche in a greater community. I have always felt that bears represent the earth tones of the rainbow spectrum. In my personal experience, bears more often seemed a little more laid-back, easygoing, and less concerned with themselves or what others think. Yes, in the end we’re all gay men, and yes, we all have our moments of well-celebrated and cherished queeniness, but in a world of vodka tonics and Stolis with a splash, I think bears are the brown alcohols, the beers and the black and tans. We are a community of men who appreciate the look and feel of other men. Handsome, rugged, stocky, burly, built, hairy…whatever it may be. But always men. Men who like men. Bears.  —Eric Leven
Posted by Eyal Feldman at 11:40 AM No comments:

A heck of a hike

While on a recent two mile nature trail hike in Calabasas CA, me and my nephews Nathaniel, Gabriel, and Michael took some great avant garde photos of our hike from heck with the help of my iPhone photo app Hipstamatic 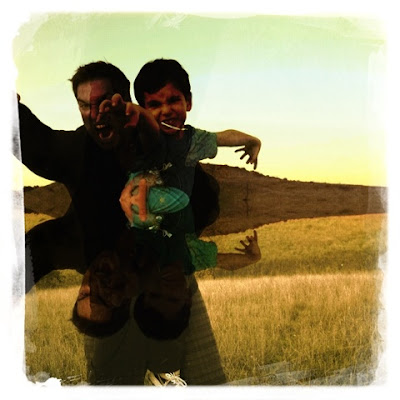 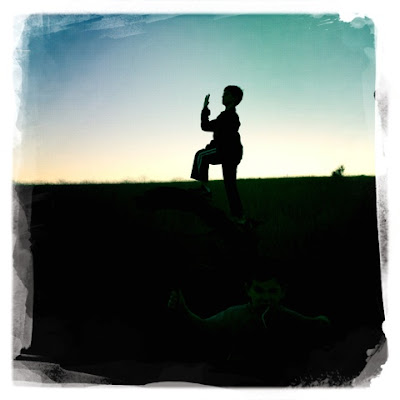 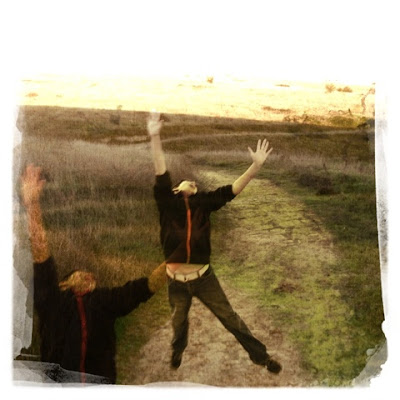 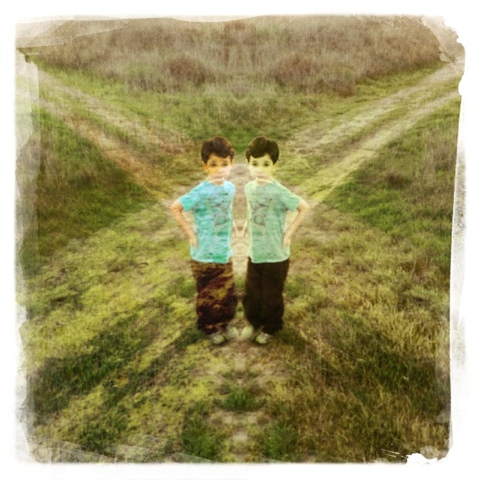 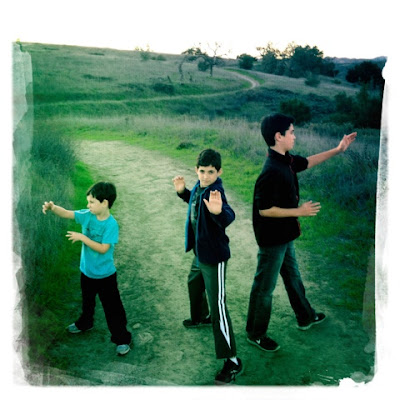 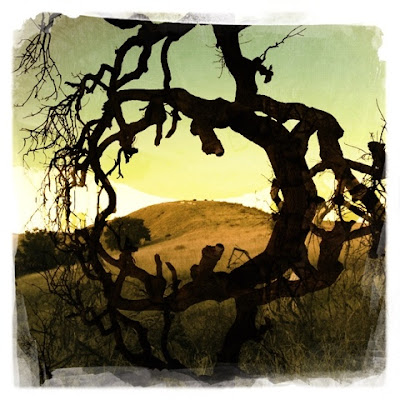 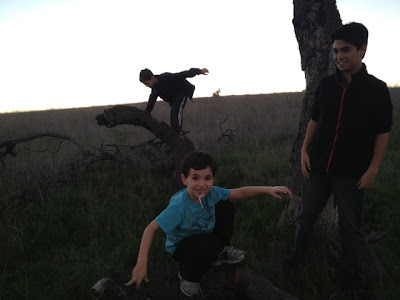 I love these kids

“Nature's first green is gold,
Her hardest hue to hold.
Her early leaf's a flower;
But only so an hour.
Then leaf subsides to leaf.
So Eden sank to grief,
So dawn goes down to day.
Nothing gold can stay.”
― Robert Frost
Posted by Eyal Feldman at 1:57 PM No comments:

Posted by Eyal Feldman at 3:14 PM No comments:

Several thousand sharply dressed gay new yorkers crowded Chelsea Pier's Pier 60 Hall and brought gifts and donations for needy children for SAGE's 27th annual Toys Party. With great merriment and drunken delight (due to the open bar) we celebrated the upcoming holiday season together meeting old friends and making new ones. It was real treat to see and hear Mayor Michael Bloomberg address his vociferous supporters (video below). In addition, it was an early Hannukkah gift for me to see such a prominent Boy Butter display at the party's entrance and what a beautiful Boy Butter display at that. 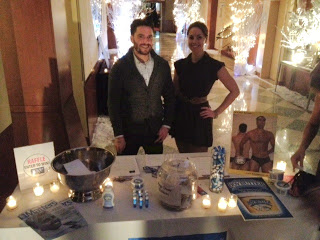 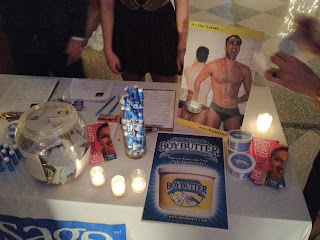 Posted by Eyal Feldman at 1:04 PM No comments: 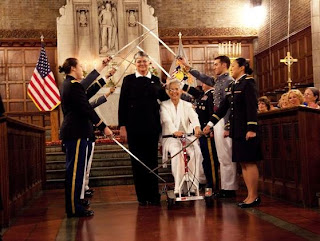 A little more than a year after the repeal of “Don’t Ask, Don’t Tell,” Penelope Gnesin and Brenda Sue Fulton were married in the first same-sex wedding held at the US Military Academy’s Cadet Chapel at West Point on Saturday.
According to USA Today, Gnesin and Fulton’s was the second gay wedding to be held at West Point; the first was between two of Fulton’s friends in a private ceremony last week in a smaller venue on the campus.
Together for 17 years, Gnesin and Fulton had a civil commitment ceremony in 1999 but had hoped to marry in their home state of New Jersey. Back in February, however, Gov. Chris Christie vetoed a gay marriage bill and according to Fulton, they “just couldn’t wait any longer.”
A major reason for their haste was Gnesin, 52, a breast cancer survivor who suffers from multiple sclerosis. She and Fulton decided to hold the wedding at West Point because the academy has been such an important part of Fulton’s life.
Fulton, 53, became the first openly gay member to West Point Board of Visitors when President Obama appointed her in 2011, but before that she was part of West Point’s first graduating class to include women in 1980. She is currently the communications director of OutServe, an organization which represents actively serving LGBT military personnel.
When she originally requested the West Point Chapel, Fulton was told that none of the presiding chaplains came from a denomination that allowed them to celebrate a same-sex wedding, so the ceremony was officiated by a friend, Army Chaplain Col. J. Wesley Smith of Dover Air Force Base.
Though they are happy to finally tie the knot, for Gnesin and Fulton, their wedding was a bittersweet occasion.
“It is wonderful for us to celebrate the recognition that New York state will give our marriage,” Fulton said, but “there is also some regret that we can’t get married in our home state.”
Meanwhile, the American Family Association’s Bryan Fischer has already weighed in, tweeting: “Military breaks the law, allows homosexual ‘wedding’ at West Point. So much for honoring their oath.”
And that’s exactly why you weren’t invited, Bryan Fischer. That and what you would consider the idea of a gift. Pretty sure eternal hellfire not on the registry.
Photo: Jeff Seng/Twitter via USA Today

Full story here: http://www.queerty.com/west-point-chapelholds-first-gay-wedding-20121202/#ixzz2DuPkpJq1
Posted by Eyal Feldman at 10:33 AM No comments: