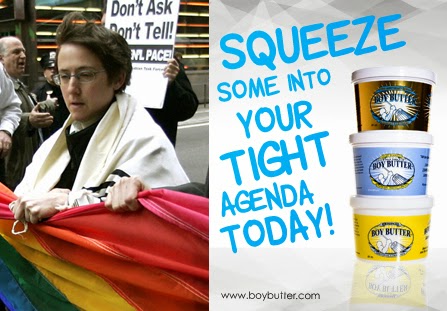 Check out my off the wall but sincere quote in the Boy Butter section of Tablet's hard hitting expose of the rifts within NYC's Gay Jewish Synagogue over the wacky political stance of it's leader Rabbi Sharon Kleinbaum. Guess which one I am in the title of this article btw?


Several present and former congregants who have raised concerns about Kleinbaum’s activism with her describe the typical response: polite acknowledgement of a difference of opinions, followed by no change in either the tenor or frequency of her public activity. Eyal Feldman, an Israeli-American and founder of Boy Butter lubricant, began attending High Holy Day and the occasional Friday night services at CBST soon after he moved to New York in 2000 primarily as a social activity. He “always felt a little bit uncomfortable with her politics,” but was willing to stick it out because he had made so many friends. Feldman—whose blog “shares his global adventures in fighting friction with a mix of social and personal lubrication”—however, “stopped going three years ago because of the very same reasons Bryan left the board. I found her to be political and not at all balanced. … I couldn’t sit there and listen to that because if my eyes rolled anymore they would have popped out of my head.”
***  To read whole Tablet article by James Kirchick Click HERE
Posted by Eyal Feldman at 1:08 PM 3 comments:

Michael Lucas, arguably world's most famous gay adult movie director, is also Israeli and a prominent LGBT rights activist. He came to Israel to show his support amid ongoing fighting with Gaza. Watch full interview and click here for original post
Posted by Eyal Feldman at 11:25 AM No comments: