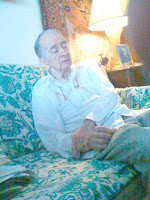 Lawrence Murphy 1924-2010
My good and beloved friend Larry Murphy passed away last night due to complications from pneumonia. Larry was born in Illinois in 1924 and raised since the age of 12 in Walla Walla, Washington went to college and moved to Seattle and worked as a Librarian. In 1957 Larry moved to NYC and became a faithful and dedicated Librarian for the New York Public Library. He shared 46 happy and loving years with his life partner Bob Goldstein, who himself passed away in December of 2007. Due to Bob's passing, Larry grew depressed and lonely and sought out the services of the friendly visitors program of SAGE, (Services and Advocay for Gay Elders) an organization Larry supported since its founding. And it is an Organization I actively support and volunteer with.
It was through SAGE I was paired up as Larry's friendly visitor and since Nov 4th 2008 we met usually twice a week and just visit. For almost a year and a half I have had the pleasure, honor and privilege of knowing this truly amazing man. He has taught me so much about life, history, relationships, love and now ultimately death. I hope that I brought as much comfort and joy to his life as he brought to me. He was a good, wise, intelligent, funny, sensitive and loving man. He will be sorely missed by all his friends and family.


May G-d Bless Larry in the next life as much as he did in the previous.

A memorial service is being held at Monday March 8th, 4 pm at the