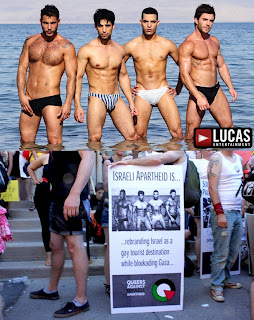 World Famous Gay Adult Film Producer Michael Lucas of NYC is demanding that the political group Queers Against Israeli Apartheid stop using images from his Men of Israel shot in Israel on anti-Israeli propaganda at Gay Pride Events.
The signs were carried by protesters during a Gay Pride event in Toronto and used an image from Lucas Entertainment film Men of Israel. The signs used the copyrighted image to wrongly and misguidedly portray Israel as an "apartheid" state.

"I was really amused to see this enigmatic picture from my film Men of Israel on the poster of anti-Israel demonstrators," says Lucas. "I am happy that this series of bestselling movies, including Men of Israel, has made them mad, because it shows Israel just the way it is, a joyous and beautiful safe haven for LGBT people. That is the reality of Israel. Obviously that is not how Queers Against Israeli Apartheid would like to see Israel portrayed."
The full article