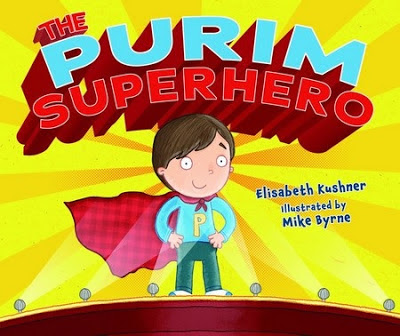 Kar-Ben Publishing of Minneapolis, Minnesota, has just released the first gay-themed Jewish children’s book. The book, which has a Purim holiday theme, is being published in conjunction with Keshet, an advocacy organization which describes itself as working for the full inclusion of lesbian, gay, bisexual and transgender Jews in Jewish life.
The Purim Superhero is the story of a young boy whose dilemma over which Purim costume to choose is solved with the help of his two dads.
According to Keshet, the book is the winner of the organization’s national book-writing contest. “We’re so proud to have played such a key role in the publication of this book,” the organization announced on its website, calling The Purim Superhero “the first LGBTinclusive Jewish children’s book in English.”
Author and illustrator Elisabeth Kushner is currently on a book tour throughout the US.
“I realized that my old idea for a Purim story was a perfect fit for this project,” Kushner said in an interview posted on Kar-Ben’s website.
“Purim is very much about ‘coming out’ as yourself – Esther is a great example of someone who comes out of the closet for a good cause – and I thought that would be a good setting for a book about a kid with gay parents.”