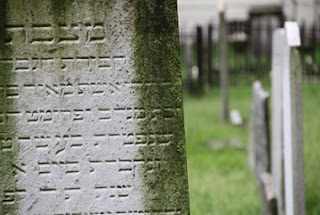 Three cemeteries belonging to Shearith Israel, the oldest Jewish congregation in North America, are tucked away in Manhattan, a visible legacy of New York City’s long-ago Jewish past.
By Adam Chandler

There’s a small Jewish cemetery tucked away on an unlikely block in Manhattan, behind some condominiums on West 21st Street. It’s just a few minutes from Tablet Magazine’s new office on Tin Pan Alley, and I recently stumbled upon it. As it turns out, it has two siblings further downtown, and, taken together, the trio offer a window into the history of both the city and its Jewish community.
The three historic Manhattan cemeteries belong to Congregation Shearith Israel, a Spanish and Portuguese synagogue in Manhattan and the oldest Jewish congregation in North America, established in 1654. They are perhaps the most durable legacy of New York City’s long-ago Jewish past. The Shearith Israel congregation was founded by 23 Jewish refugees, descendents of Spanish Jews, exiled during the Inquisition, who fled from Recife, Brazil, after it was taken from the Dutch by the Portuguese. They were fleeing anti-Semitism but were greeted coldly by Peter Stuyvesant, the Dutch director-general of the colony of New Netherland. From 1654 until 1825, Shearith Israel was the only Jewish congregation in New York City. In its long history, membership of the congregation has included Supreme Court Justice Benjamin Cardozo, three founders of the New York Stock Exchange, and the poet Emma Lazarus, whose famous words from “The New Colossus” are affixed to the Statue of Liberty. Shearith Israel—the name translated is “Remnant of Israel”—owns a Torah that dates to the American Revolution.
Click here to read the full article from Tablet Magazine
Posted by Eyal Feldman at 10:57 PM