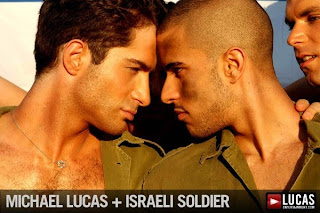 They are fit, tan, confident, and exude Israeli ruggedness that is hard to withstand. These qualities apparently make IDF soldiers one of the most sought-after tourist attractions for gay tourists.
In recent years, a numerous and varied attempts have been made to market Israel as a country friendly to gay tourists. Two New York companies, Steele Travel and Lucas Entertainment, offer travel packages to Israel for the gay community.
Lucas Entertainment, a porn production company, recently played a winning card in the battle over tourists' wallets. In addition to sites popular to gay tourists to Israel, the company offers an attraction that many a gay tourist would not want to miss – a visit to an IDF base and a memento picture with a sexy soldier taken by a professional photographer.

While the IDF suffers from a particularly negative image in world media, Israeli soldiers themselves, it turns out, are a different story. At least, this is what Michael Lucas, a porn actor and producer and owner of Lucas Entertainment, believes.
"The Israeli photographer I work with knows a lot of hot soldiers. He has already photographed some of them. So we are going to get some of them together, and whoever in the group is interested can take a picture with them," assured Lucas on Thursday.
Lucas, who was born in Russia to a Jewish family and immigrated as a child to the US, often proclaims his love for Israel in interviews. Last year, he even arrived in Israel to shoot a porn film entitled "Men of Israel."
nine-day tour of Israel that will leave on May 26. For $2,800 (not including airfare), gay tourists can visit the sites in Israel as well as meet with soldiers. Thus far, 18 people have signed up for the trip.
"I donate to the Friends of the IDF in the US, and its more than acceptable for donors to tour bases when they come to Israel," explained Lucas. "I submitted a request, and we are working on organizing the visit. I want to bring the tourists to a military base so that they see Israelis are a peace-seeking people who aren't looking for war, but are just trying to protect themselves."
American Friends of the IDF reported in response that not all donors are received on IDF bases.
Despite the Zionist message, Lucas makes certain to present the Israeli soldiers as a fantasy. On the website promoting the trip, muscular men are depicted wearing military pants. In another picture, Lucas is seen hugging a man as both of them are wearing IDF uniforms.
Lucas claimed that he is not organizing these trips merely for personal profit: "I don't see any problem with a group of gay tourists visiting an IDF base. I am doing what the State has not been smart enough to do – marketing the beautiful side of Israel to the world."
Posted by Eyal Feldman at 9:26 AM