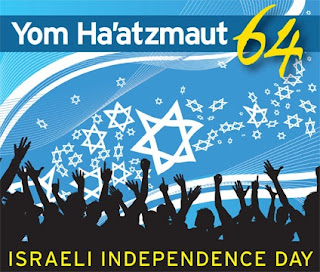 JERUSALEM (AP) — Israelis celebrated their country's 64th anniversary Wednesday with fireworks and military processions at a national ceremony in Jerusalem.
The festivities came immediately after Memorial Day for fallen soldiers and victims of militant attacks, an annual ritual of twinning grief with elation and pointing out the link between the two.
Preparations for Independence Day were marred last week when a lighting rig collapsed during a rehearsal, crushing a young soldier to death.

Speaking at the official ceremony, Parliament Speaker Reuven Rivlin cautioned against extremism of all stripes, naming ultra-Orthodox Jewish zealots, ideologues who burn mosques and activists who delegitimize the state as "those who threaten the future of Israeli society."
Government statistics showed that Israel's population grew by 137,500 since last year to 7,881,000. The Central Bureau of Statistics said 75 percent of the population is Jewish and 21 percent is Arab. The remaining 4 percent represents tiny minorities or immigrants who are not Jewish.
Traditional Independence Day celebrations include dancing in city streets and family cookouts in national parks. Some military bases open Thursday for visits, and Israeli cities host open-air concerts in honor of the holiday.