"Naked sea" revealed. 1,200 people bared all to support the environment in this breath-taking, historical event. 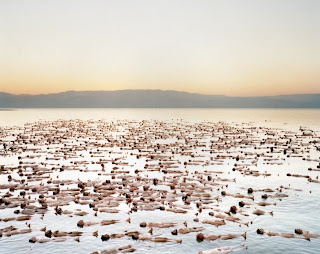 “Naked Sea”, artist Spencer Tunick’s awe-inspiring first image from his extraordinary artwork created on the shores of the Dead Sea has been revealed. Tunick located his art project in Israel with the purpose of supporting the global campaign to promote voting for the Dead Sea as one of the New Seven Wonders of Nature. The campaign was originated by the New7Wonders Foundation, headed by Bernard Weber, to find the world's new 'seven wonders' and is in its final stage ending 11.11.11.

“Naked Sea” is a grassroots project initiated in Israel to emphasise and draw attention to the growing environmental issues of the Dead Sea. More than 1,200 people from Israel and abroad arrived on the Western shores of the lowest lake on Earth just before dawn on Saturday, 17th September to take part in Tunick’s art project.
Click here for original story link.
Posted by Eyal Feldman at 12:47 PM