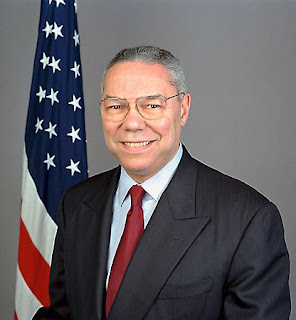 Former Secretary of State Colin Powell crossed party lines this morning to endorse Sen. Barack Obama for president, the most prominent GOP defection yet of the 2008 campaign.

Powell said he had watched both Obama and Sen. John McCain in the last "six or seven weeks," since the national political conventions, and paid special attention to how they reacted to the nation's worsening economic situation.

"I must say, he seemed a little unsure about how to approach the problem," Powell said of McCain. "He didn't have a complete grasp of the economic problems we have."

Powell also expressed concerns about McCain's selection of Alaska Gov. Sarah Palin as his running mate. "I don't believe she's ready to be President of the United States, which is the job of vice president," Powell said, adding that it raised "some questions in my mind" about McCain's judgment.
Posted by Eyal Feldman at 11:35 AM