Enlisting From Afar for the Love of Israel 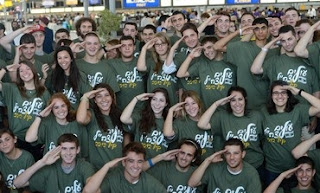 JERUSALEM (JTA) -- A charter aliyah flight carrying 127 young men and women who will be joining the Israel Defense Forces landed in Israel.
The special Nefesh B'Nefesh-Friends of the Israel Defense Forces flight, carrying a total of 350 new emigres to Israel, arrived early Tuesday morning in Israel.
Hundreds of families and friends as well as Israeli dignitaries gathered at Ben Gurion Airport for an arrival ceremony featuring an address by Prime Minister Benjamin Netanyahu.
"Each of the 350 people who have made aliyah today have decided to link their personal future with the future of the Jewish state and the Jewish people," Netanyahu said. "But you’ve decided to do something else. You’ve decided to defend the Jewish future, and to have the opportunity to do so is a great privilege. It wasn’t accorded to previous generations of Jews.
"In previous times, for almost two millennia, the Jews could not defend themselves. This is the great transformation that occurred in our time -- that we can regain our destiny and defend our future -- and this is a privilege that you have now decided to practice personally, thereby altering your lives and the Jewish future as well."
The prime minister asked Nefesh B'Nefesh founder Tony Gelbart to arrange a meeting with the new soldiers in three years, when they have finished their military service, to salute them again.
The flight was organized in cooperation with the Ministry of Immigrant Absorption, the Jewish Agency for Israel, Keren Kayemeth Le’Israel and Tzofim Garin Tzabar.
The Friends of the IDF and Nefesh B’Nefesh are working to expand their existing partnership, which provides comprehensive support for Lone Soldiers, who serve in Israel though their families live in the Diaspora. The program offers assistance before and during army service, as well as with post-army acclimation into Israeli life.
More than 2,700 Lone Soldiers from around the world are now serving in the IDF, including more than 900 from North America, 625 from Russia, 390 from Ukraine and 250 from France.
More than 4,800 American, Canadian and British Jews have or will be making aliyah this year, which marks Nefesh B’Nefesh’s 10th anniversary.